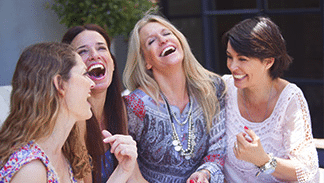 Welcome! It’s lice to meet you. As a mother of six parasite-prone children, I have tons of lice experience. In fact, I’m just itching to show off my “lousy” resume and if necessary, I can supply three nitwit personal references too. Letter of recommendation? Yep! I’ve got a truly hair-raising one written by a nymph, (an immature, teenage louse) herself. And that’s just the tip of the iceberg.

But I’ll spare you all of that and simply invite you to stick around here for some humor, support, and the calming reassurance that you’ll find in our Parenting Corner because you’re never alone. That’s right, we’re always in your corner and we’ll get through this together because you know what they say? “Nit’s a small world, after all!”

As a way to cope, think back to Psych 101 class, where you learned about the Five Stages of Loss & Grief.

Now brace yourself because here’s my version with a licey twist!

1. SHATTERED INNOCENCE: (The Warning Signs!) Official-looking lice notices fly (even though lice don’t fly!) around school everywhere. You walk in on the tail end of a conversation between two mothers using the “L” word in hushed tones. Throats clear. “We meant ‘sLice,’ as in pizza day.” Gotcha! The weekend slumber party circulates ghost stories about eggs lodged in a popular child’s hair that are more chilling than chanting, “Bloody Mary” three times in the mirror. And finally, that fateful episode where Muffy contracts lice on the animated children’s series Arthur airs three times in one week. Ominous foreshadowing? Perhaps.

2. DENIAL: (The Disowning Thoughts!) My little boy’s allergies sure are acting up, must be a reaction to that new hair gel. Lemme take a closer look, (gasp) “Tell me, sweetheart, did you by chance participate in a fun craft project in school today with glitter that looks like poppy or sesame seeds?!” Lice is something that only happens to other families and Pam What’s-Her-Face on that hit show, The Office. I’m a good mother, wife, housekeeper, laundress, hygiene-instiller, Girl Scout leader, (fill-in-the-blank) and I buy all organic produce . . . so it simply cannot be lice. It’s dandruff, dangit.

3. BARGAINING: (The Deals!) Please. I’ll volunteer to be Room-Mother at school AND the field trip driver. Okay, I’ll also become the art assistant. Absolutely, I’ll totally give up my “eating the jar of Nutella with a spoon” habit. Cold turkey. And I’ll stop complaining about having to buy knock-off designer purses at Target. Just please let me wake up and make these Super Lice a bad dream.

4. TERROR: (The Faulty Assumptions!) Life as I know it, is officially over. We’ll be branded with Scarlet L’s on our chests forever. We’ll never be hugged again. All the moms will think we’re the ones who started it. And Eeek! The bugs are everywhere – – our car seats, the sofa, inside Cheerios cartons, they’ve burrowed into our drywall, and our shag carpets are literally teeming with them. OMG. Did I just use the word “teeming?” Who even says that??

5. ANGER: (The Ranting!) It was that weirdly dressed kid at school whose mother is an Avon Lady and still throws Tupperware parties, I just know it. Don’t even think about watching TV in the lice-free common area formally known as the family room! You’re gonna stay isolated in that bathtub for 2 whole hours while I pour ingredients typically found in a cobb salad onto your scalp. Forget the washing machine … let’s trash all the linens and clothes. Are you certain we’re current on our homeowner’s insurance premiums, Dear? Great. Fetch the box of matches and some kerosene!

6. SPECIAL CELLPHONE OUTBURST: (Hating On Technology!) Stupid Selfies! Who leans their head right next to their BFF’s long hair 167 times a day to take pictures that will vanish after 10 seconds anyhow? What’s the point? You want to have a photo near someone else so badly? Cut his or her face out of the school yearbook with a scissors and paste it next to yours. I remember when we just had cameras and wristwatches. Where were all the lice back then??

7. RELUCTANT ACCEPTANCE: (But No Surrender!) Deep breath. Oh, it’s just a nice white paper towel from that super-absorbent roll I bought last week . . . with three wriggling, filthy vermin on it. Well that’s the living proof, I suppose. I’ve researched online for hours and here’s an interesting tidbit — Did you know in 1100 A.D. that a Rabbi proclaimed it was permissible to remove head lice on the Sabbath? Now I can officially pun with the best of ‘em. Listen to this . . . “I’ve got a new lease on lice” and “No more Mr. Lice guy.” Guess what else? I carried this baby for 9 months, labored for 28 hours, and needed an emergency C-section — so if you blood-sucking, beastly, six-legged grotesque organisms think you’re gonna have a piece of her, you’ll have to get through me first!

POST-LICE PARANOIA: (The Odd Behavior!) Temporary Neat Freaks unite! In this final stage, you have never scrubbed your house so thoroughly. And by “you,” I mean your spouse. You hire the little person who played Tangina from the 1982 movie Poltergeist to declare, “This house is clean!” Your daughter is forbidden to play beauty parlor with Katie ever again. If they get bored, they can just French braid each other’s fingers. You say things like, “Nobody needs to sleep with their head on a pillow, it’s bad for the spine.” And are constantly shouting, “Kendall! Tell me I didn’t just see you scratching?!”

So there you have it. No matter what stage you’re in, if you’re feeling like it’s a “no-win nituation,” rest assured that countless others have gone through these familiar phases before you. And they all came out just fine, maybe they’re even laughing a bit, in retrospect.

Until next time, I’m Debra Dé Louse (and no, we can’t blame my mother for the name. My father was the one who picked out ‘Debra’) reminding you that there can be saNITy around a nit. Just call Lice Clinics of America because they have guaranteed results, all treatments are non-toxic, and they are recommended by pediatricians.

About Lice Clinics of America

Lice Clinics of America has successfully treated over 850,000 cases. The company has over 300 clinics in 35 countries, making it the world’s largest network of professional lice treatment centers. Lice Aunties have locations in Newton and Woburn and are open seven days a week by appointment. Call (617) 544-2850, email Info@liceaunties.com, or visit liceaunties.com for more information or to schedule an appointment.